OSHA Proposes $130,200 in Fines to Aluminum Plant for Willful Exposures

Scope: Matalco US is under investigation by the US Department of Labor for exposing workers to amputation, fall hazards and unsafe crane operations.

What Happened: Following a complaint, OSHA initiated an inspection in March 2014 of the Matalco US facility in Canton, Ohio that produces aluminum material for use in the automotive industry. Two willful, one repeat and two serious safety violations were issued.

The repeat violation was issued for exposing workers to a fall hazard of more than 23 feet at an open pit where the company had not installed guardrails, and the workers in the area were not provided fall protection.

In 2012, Matalco US was previously cited at this facility for this same violation. The two serious violations involved unsafe use of a forklift to elevate workers and operation of live electrical equipment operating at high voltages without proper guard against human contact.

Results: The company was fined $130,200 and placed in OSHA's Severe Violator Enforcement Program.

Notes: Howard Eberts, OSHA's area director in Cleveland said, "By placing Matalco US in our Severe Violator Enforcement Program, OSHA is putting the company on notice that this is unacceptable." 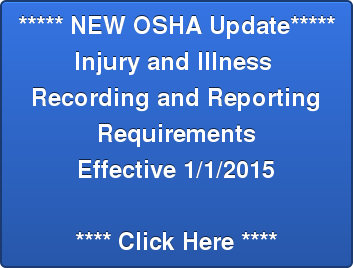 Scope: Indianhead Explorations LLC was inspected by OSHA after the March 2014 incident and was cited for willful and serious safety violations.

What Happened: After an explosion at the St. Augustine facility where one worker was permanently disabled and a second worker suffered a leg injury, OSHA's inspection uncovered two willful and seven serious safety violations.

The explosion was a result of a lack of proper safety measures being in place while workers were using a torch on a pipe that carried flammable gas. The two willful violations were a result of exposing employees to amputation hazards from a lack of machine guarding and allowing boom cranes to be in operation that were out of inspection and had performance issues due to defective brakes and load cables.

The serious violations were a result of workers being allowed to use damaged oxygen cylinders; failing to clean, ventilate or test gas cooling supply systems prior to use; several pieces of equipment lacking machine guarding which exposed workers to flying debris; and failing to provide a vent or opening for the release of built-up pressure while using a cutting torch.

Results: OSHA has proposed $93,300 in penalties for the 9 safety violations.

Scope: As part of OSHA's Regional Emphasis Program for Safety Hazards in the Auto Parts Industry, an inspection at the Prattville facility uncovered repeat and serious safety and health violations.

What Happened: Two repeat violations were discovered that involved blocking emergency exits and exposing workers to slip, trip and fall hazards. The company was cited for these same violations in 2013 and 2010. Eight serious violations were found involving lack of lockout / tagout procedures and training and a lack of fall protection equipment which exposed workers to fall hazards of up to 40. Seven additional violations included failing to certify OSHA 300 logs and a lack of a respiratory protection program.

Results: OSHA is proposing penalties in the amount of $67,500 for the 17 violations.

Notes: "Our inspection found that employees were exposed to numerous safety and health deficiencies, such as falls, amputations and electrocution hazards, all of which can result in serious injury or death," said Joseph Roesler, OSHA's area director in Mobile.