Manufacturer exposes employees to dangerous respiratory, chemical and other safety hazards. US Chutes Corp. faces $94,248 in fines for repeated and serious violations.

U.S. Chutes Corp. exposed employees to chemical, mechanical, electrical and respiratory hazards during the manufacturing process at its Bantam plant, an investigation by the U.S. Department of Labor's Occupational Safety and Health Administration has found. A manufacturer of galvanized chutes for laundry and trash conveyors, the company faces $94,248 in fines.

"U.S. Chutes' employees risked illness from toxic chemical exposure and inadequate respiratory safeguards and faced injury from electric shock, lacerations, crushing and burns. Particularly disturbing was that several hazards were similar to those cited by OSHA in November 2009," said Warren Simpson, OSHA's area director in Hartford. "The company must promptly and effectively correct these conditions because the health and well-being of its employees cannot be compromised."

After a complaint was received, an OSHA inspection began on July 10, 2014. OSHA discovered nine repeated and 15 serious violations of workplace health and safety standards at the site. The inspection identified many hazards, which included an out-of-date respiratory protection program for employees who welded and spray painted; no medical evaluations and fit testing for workers who wore respirators; and no hazard analysis to know what protective equipment was needed to protect employees.

A repeated violation exists when an employer has been cited previously for the same or a similar violation of a standard, regulation, rule or order at any other facility in federal enforcement states within the last five years. A serious violation occurs when there is substantial probability that death or serious physical harm could result from a hazard about which the employer knew or should have known. 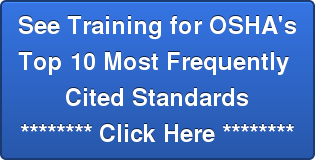